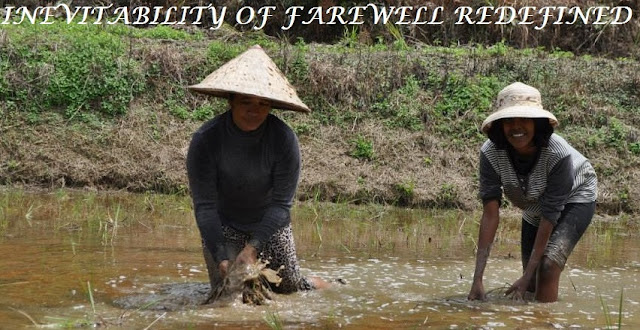 I have always dreamt of building a world filled with people I have crossed paths with―people who impacted me so deeply that they left a crack in my heart that can never be filled by anyone else. However, goodbyes are inevitable in this world. Every time the moment comes to bid goodbye to a community, family or a group of friends that I grew close to, my heart bleeds.

“Don’t be so old school la. Now kan got technology. Got Facebook, WhatsApp, Skype etc. We can always keep in touch.” These are often the remarks I get when I try to tell others that things are never going to be the same once we are separated by distance. Don’t you agree with me that your priorities change and you ‘keep in touch’ by texting or calling but the emptiness is always felt?

So, what’s the point of making new connections in the first place if farewells are inevitable at one point or another in life? I was dwelling upon this thought when I first landed in Bario. I was ready to meet the community but not so ready to open myself up to anyone. As we (Project WHEE! participants) first arrived in the Bario Asal Longhouse, we were greeted by faces unknown to us with genuine smiles and handshakes. I felt welcomed, almost as though I was returning home after spending years away.


My question about farewell was only answered during my second working day with Sina Mayda (the lady I was assigned to in Arur Dalan). We went to the paddy field earlier than usual to avoid working under the hot sun. The 15-minute walk to her paddy field felt short due to our singing and her explaining about the wide variety of flora along the way.

While we were collecting grass that had already been cut by a Penan worker in her paddy field, Sina (mother) asked, ‘Uding Aran (my Kelabit name, first part was given by Tepuq Sina Rang while the second part was by Sina Mayda), apa orang India buat masa orang meninggal dunia (what do Indians do when someone passes away)?’

She had been curious about our way of life since the first day I met her. This was one of the many questions she posed. As I explained about the Indian funeral rites, I also learnt about the Kelabits' methods of conducting funerals. She also related death to farewell which led me not to look at farewells the same way ever again.

Her way of reasoning (which was in Malay) is as follows:


‘Death is certain. We all know that, right? The same applies to farewells. I am aware that farewell is inevitable even in our relationship. So, if I cry when you leave, that doesn’t mean that I want you to stay with me forever. It is just a momentary sadness. I would still be happy because you’re leaving for good to continue your life in a direction that is just different than mine. That thought of separation from each other’s life is not going to stop me from embracing you and this relationship and be grateful that our paths crossed.’

Those words struck a chord in me. There she was, standing in a paddy field, her feet in mud, shedding light on another way to look at farewells; there I was, learning in the least expected place, that what matters the most is the moments spent and the presence which should be embraced.

After 22 days in Bario, when the day of farewell finally came, it was a different farewell from all the others I experienced. My heart didn’t bleed much; rather it swelled with gratitude for the memories created, lessons learnt and connections made in the Bario highlands.

“Farewell is said by the living, in life, every day. It is said with love and friendship, with the affirmation that the memories are lasting if the flesh is not.” – R.A Salvatore