The first lady I was assigned to was Aunty Tagung, someone who cared deeply but didn’t always show it. My first week with her was mostly doing housework like laundry, mopping, sweeping, clearing cobwebs etc. in preparation to receive guests in her homestay. 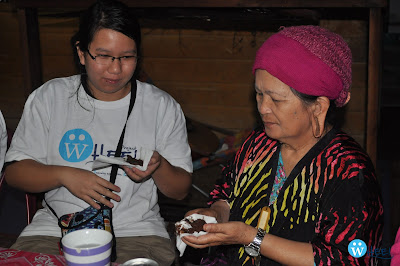 She even went the extra mile to prepare liquid soap for the guests even though I told her that a bar of soap would suffice. Through how hard she prepared and how overboard she went for the arrival of the guests, I could tell that the Bario hospitality was strong in her. When the guests arrived, she would smile her most genuine smile, the kind of smile I wondered why I never managed to pull out of her.

For a while I had thought maybe she just didn’t really like me. Many times she sent me off to do other work while she did hers. She even criticized my mopping. (I blame the children for running all over my work! >=[ )

After the busy first week, Aunty Tagung was no longer expecting guests in her homestay and we were back to doing what she does normally: gardening.


She only trusted me with weeding and even that she criticized! I really began to believe that maybe she just really doesn’t like me but at the end of the day before I went back, she said “Thank you, darling.”

It was a moment that threw me off and caught me completely off guard. I had previously thought she didn’t like me. After that, I started to think about moments of kindness from her that I had failed to pick up on; like how she lent me boots into her garden full of sharp zinc plates and how she constantly told me to be careful lest I got cut and how she would always ask about what I like to eat and avoid cooking food that I don’t like. I would have picked up on these little cues earlier had I been more attentive.

I realized that she was just a caring person who didn’t know how to properly express herself so I started paying attention.

On our last day together, she had opened up so much. We ended up chatting and laughing a lot. She even prepared salmon for lunch! I almost never have salmon at home let alone in Bario!

Later that evening she had asked who my next tepuq will be for the next week and a half after her. I told her that it was Tepuq Sina Do Ayu in Arur Dalan. She then asked me if I had her phone number. I told her no and asked why. She told me that she wanted to call my new tepuq and tell her not to bring me to the paddy fields as I had a wound on my foot. I was really moved.

I didn’t see her for a week and a half after that while I shadowed Tepuq Sina Do Ayu. It wasn’t until our last night in Bario (Cultural Night) and on the day of our flight back to Miri that I finally saw her again and the genuine smiles she finally gave me.

On the day of my flight, Aunty Tagung had even cycled all the way to the airport to bid me farewell. When I asked permission to ride her bike for a few moments before I flew off, she was apprehensive and worried I would fall down!

My time with Aunty Tagung taught me that even though someone doesn’t outright say they love you or show you affection, you got to be attentive enough to pick up on the hints and subtleties. Only then you will see the affection and care people weave into their words and actions.
Posted by Lim Hooi Ju at 09:58:00 No comments: