"The primary purpose of dialogue is to learn, that is, to change and grow in the perception and understanding of reality, and then to act accordingly."

– The first of the ten commandments of dialogue by Prof. Leonard Swidler.

These words are especially important for an initiative such as WHEE, where the core of achieving our social mission is through community understanding by means of people-to-people engagement. For this reason, we decided that it was appropriate and timely to launch a ‘Talk Series’ as a part of the side activities in the 'Bario: Growing Food, Sustaining Culture' project last January.

Many of WHEE's projects often entail the formation of close relationships between the participants and the local beneficiaries whilst working together. This also leads to the raising of many questions, opinions and revelations, often discussed internally. As a coordinator (and non-Kelabit), I am careful with the words I use when answering questions about the Kelabit community on behalf of them. This constantly keeps me on my toes and encourages me to learn, fact check and be up to date with community developments and issues.

However, there are some questions which I feel are better left to be discussed together with the locals themselves, as that enhances the credibility and clarity of the answers received by the participants. A few examples of the questions which fall into this category include, 'What will happen when this generation of Kelabits leaves?', 'Why were certain practices given up when the Kelabits embraced Christianity? Is that a good or bad thing?' This is also one of the main rationales behind the birth of the Talk Series.

The Talk Series is an opportunity for the Bario community and WHEE participants to dialogue and exchange knowledge on various topics centered around the factors that have made Bario special as an agricultural, tourism and cultural heritage destination. In January, this series consisted of three separate panel discussions in the Bario Asal village. Each panel featured two speakers and each was given 15 minutes each to share. This was followed by a Q&A session with the participants. The speakers were community members experienced and knowledgeable in their respective areas, and all were briefed with the discussion points prior to their sessions.

The session report is as follows:

Session 1: Topic: The History of farming in Bario

Tepuq Gerawat and Tepuq Ratu Aran, a huband and wife duo, are experienced farmers who returned to Bario after many years in the city to maintain their farms. They chose to practise traditional farming as they still have the willpower, physical strength and passion to farm in this manner.

Their informative session was deemed ‘eye-opening’ for the participants as it provided context to the current challenges faced by local farmers, the general farming processes and the differences between traditional and mechanized farming in Bario. It was a good verbal introduction to rice farming as this session took place a day before the participants step foot into the paddy fields. 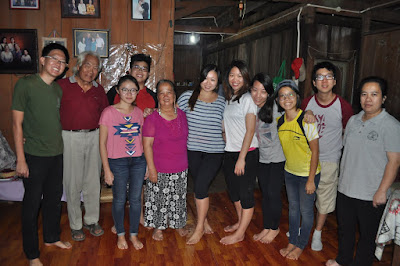 
This session was a two-way dialogue between the speakers and the participants on the points stated above.

Chris and Paul, both permanent residents working in Bario mainly discussed how similar rural and urban youths are in terms of aspirations and hobbies. The only difference setting the two groups apart are the social, environmental and cultural settings which dictate the type of jobs and activities available to each of them. The conversation also shifted to the subject of education, on how our education settings could be the baseline of how we view and value our own culture, gain exposure to other races and provide opportunities for success.

As the format of the 'Bario: Growing Food, Sustaining Culture' project does not involve much interaction with youth, this session was a great way to expose the participants to the local younger generation's perspective on cultural preservation, rural vs urban youth aspirations, as well as rural development. 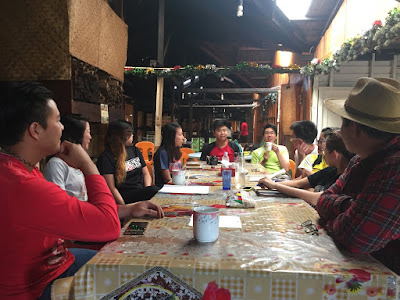 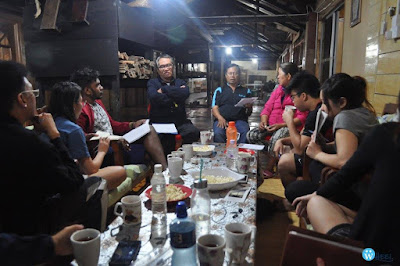 Dato’ Robert, a former Director of Immigration of the state of Sarawak and a historian, gave a timeline of the historical events that Kelabit community went through, shared about the major events that facilitated societal changes, and explained the past and present community practices in detail. As for Tepuq Panai who is a former teacher, shared about the specific cultural changes as the Kelabits moved from animism to Christianity and how a balance is struck between preserving traditional practices and adapting to modernization.

This discussion helped the participants understand the progression of the Kelabit society within Bario and gave them a historical context to the major changes in the cultural and lifestyle practices, notably on how religion has become a major part in the community's culture. The Q&A session focused mainly on the changes in specific practices and whether they were continued or given up for religious or modernization reasons. 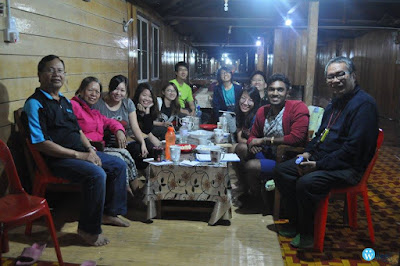 Overall, the Talk Series was an effective method to gather facts and opinions about Bario from the locals themselves. Bringing it back to the ultimate project goal, WHEE certainly learnt that exploring the preservation of traditional farming does not only entail the familiarisation of oneself with agricultural knowledge, but also with history, culture and the spirituality of the community, all of which must be understood and respected before a embarking on a journey towards sustainable change.
Posted by Daniel Agan at 09:14:00 No comments:

Growing up in a city like Kuala Lumpur and pursuing my higher education at Sydney, I've always been in a fast-paced environment. Everything and everyday passed by so quickly that I do not even have the time to stop and think. It was like I am constantly on auto pilot mode.

Hence, I made the decision to participate in WHEE's Bario: Growing Food, Sustaining Culture volunteering program in Bario for 10 days. I wanted a change and to experience the lifestyles of the Kelabits and to understand their ways of living. Furthermore, this would be my first time flying to Sarawak. 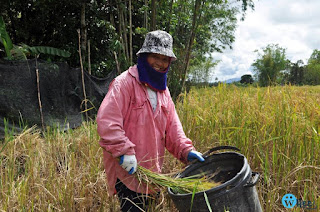 Participants were paired with a farmer, or as we fondly address them, Tepuq (a Kelabit term to address the elders). Mine was Tepuq Do Ayu. I had to walk a good 15 minutes to her home in Arur Dalan Village. I was fully prepared with my boots, hat, sunblock and gloves. I still remembered how she laughed at me when I wore 2 layers of socks while she was barefoot in the paddy field, what a joke.

The first day was tiring and intense for me. We started at 8am under the scorching hot sun and I remembered being really restless and anxious about the time, all I could think of was ' Am I done yet?'. But since both of us did not have a watch, the only 'watch' we had was the sun. I found myself searching for the 12pm sun very often.

As the days went by, I tried to understand my Tepuq's lifestyle. I noticed how carefree and contented she was with her life. She was always ready to harvest rice despite rain or shine, she is a hardworking farmer indeed. I started to stop my thoughts and immerse myself with the current situation. I slowly realised how quiet and peaceful the environment was. I did not even notice that her paddy field was only surrounded by mountains, what a beautiful sight it was. Slowly I learned to appreciate the silence with her, it made me feel very calm and the only distraction for us was the noise of her chickens/dogs. 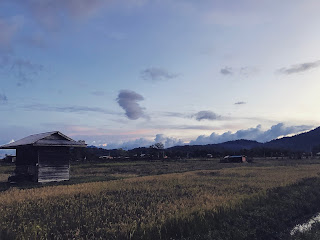 I still looked up very often, but this time not to search for the 12pm sun; it was to admire the skies of Bario. It was something about the skies there that made me feel tranquil. Maybe it was the clouds, or maybe it was God overlooking the village from above. During break time, I would look up to Prayer Mountain from the paddy fields and I would pray a small prayer for my Tepuq as well. That 15 minutes walk to her village was a morning joy for me too.

On the last day, I gave a new pair of socks to my Tepuq, her face beamed with joy. I never once thought that a simple pair of socks made someone feel so special and happy. In return, she gave me 2 large pineapples, a bag of Bario rice, pineapple jam and a beautiful necklace handmade by her. I was speechless, she treated me like her daughter and she will always have a special place in my heart. 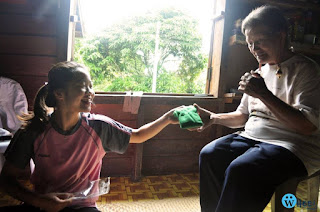 I thank WHEE for this opportunity, I feel very lucky to be able to experience this journey with Tepuq Do Ayu. Despite coming back to the hustle and bustle city life, I've learn to appreciate the little things and the people around me. I've learn to stop and admire the skies more often as it brings back good memories that I've once had at this place. Till next time, Bario.
Posted by Jac at 11:36:00 No comments: