Being Comfortable with Being Uncomfortable

I recently started to really enjoy being out in nature. When I was studying in Adelaide and Tasmania, I had a lot of opportunities to hike and see a lot of nature and wildlife around the area, so Bario sounded really appealing to me.

Except ... I grew up a city kid and don't really get along with bugs, cold showers and mud too well.

Before going to Bario, I knew that I hyperventilate REALLY BADLY when I get into freezing water. Try jumping from the jetty or having an early morning shower at a camp site, both during winter.

I think a lot of people can also relate to not being able to go to bed until you've made sure that the cockroach you saw between your cupboards is either out of your room or no longer moving.
I don’t actually have it as bad as some people do, I think, but I still had to mentally prepare myself for it all.
I remember listening to Rhon talking about eating kelatang (a worm delicacy in Bario), and I thought to myself
if I had the chance, I would like to push myself to do it, which kind of set the tone for the rest of my trip.
The cold showers slowly chipped away at me; some days it was really cold! I was breathing really heavily and
loud, and there’s even a video to prove it!
Everything else that I thought I would struggle with, I actually enjoyed a fair bit. I think the novelty of it all
and expecting it did make a big difference in terms of just preparing myself mentally to try and enjoy
whatever it might be, since it would all be a first for me.
I remember laughing at myself constantly when I was slipping and sliding in the mud during hikes.
The constant feeling of falling but not actually falling combined with my newfound “dance moves” was a
funny thought to me. I remember thinking to myself that it was cool to actually see what the bloodsuckers
in Bario looked like! I was pretty curious when we were told about them and actually seeing them did feed
my curiosity and made the bites more bearable.

I also stomached a juicy sago worm (ulat sago) during our hike.
Creepy crawlies really aren’t my thing, so I surprised myself that I ate it. Thanks Rhon.

There were also little/big things I didn’t think I’d come across. 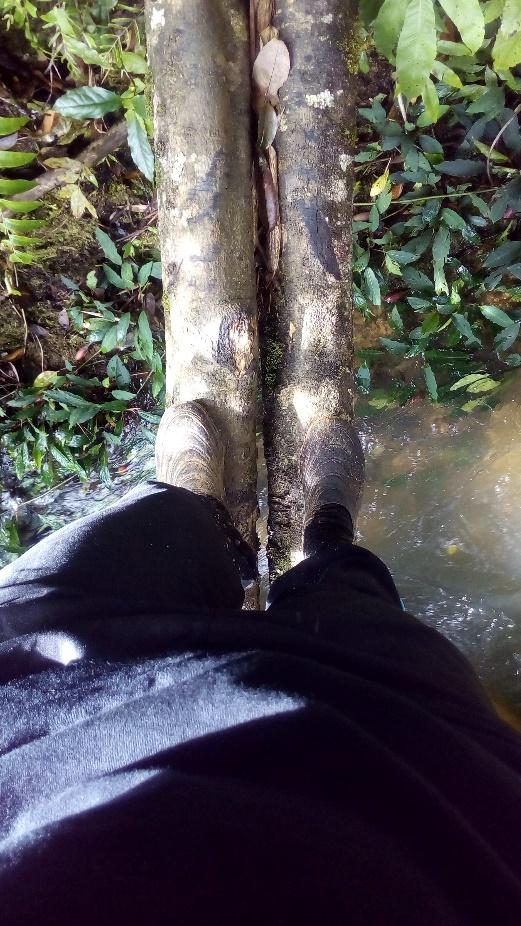 The little hike through the forest on the way to work, walking over some of the streams with make-shift
bridges out of tree trunks, playing sape, and playing bass for one of the church services were just some
the little things of the trip that I hadn’t really expected or thought of, but I had heaps of fun doing them.
You also do get pretty good at setting aside your own ideas and views after some time and just sink your
teeth into it (also quite literally).
Trying monkey meat was a little confronting at first, but I thought I would set aside my own ideas about it
and gave it a go. Sometimes, eating by the paddy fields meant cleaning the dishes with stored rainwater,
and inevitably, there would be bits of leaves, mud, and bugs in your drink or food. You just pick out what
you can, set aside what you think you shouldn’t consume, and have your meal with your Sinah.

I think taking it all in is an experience and not framing it as bad or good really made it that much more enjoyable and easier to just smile and laugh about it. After all, it was a first and definitely worth a try.
Towards the end, I realized the hot water in one of the bathrooms was
working again, so I wouldn't sound like I was having a fit in the shower.
I still had a last cold shower on the day I left Bario though.
My blogpots are really just scraping the surface of it all, and I wish I
could capture it all in the form of words and pictures, but I don't think
I could.

I think it is normal to think to yourself, 'Why am I paying all this money
to volunteer? I'm already putting in the effort and time'. (besides the
tight budgets that some social enterprises/NGOs are running on which
makes it difficult to afford a lot of these things for volunteers, but I
disgress), and it did cross my mind. Then I realised I get so much more
out of it for myself, and it isn't so much as me giving my effort and time
to collect research data as it is an exchange for anyone who comes
along with WHEE to learn a little more about Bario themselves.